END_OF_DOCUMENT_TOKEN_TO_BE_REPLACED

Who lit the spark under the NPL bonfire?

By Alison Swonnell, Director of Fund Operations, LCM Partners Limited – Non-performing loans are getting attention from the highest of places.  Search for the term and you will find a deluge of publications about NPLs from the ECB, ESMA and EBA as well as pretty much every management consultant and accounting firm. Open the financial press and almost every day there is an announcement of an asset manager, such as LCM Partners, buying portfolios of bank loans, many of which represent eye-watering figures of outstandings, hundreds of individual companies or many thousands of consumers.  A decade on from the start of the global financial crisis of 2007, why only now is there quite so much coverage and interest in NPLs as an asset class?

It is a question that is worth some reflection.  In part the answer is in the question: “A decade on....”  It is hard to believe, but, yes, it was ten years ago that the markets tumbled; Northern Rock and Lehman Brothers catapulted the European banking sector into a state of turmoil not seen since the early 20th century.  Europe’s politicians, supervisory bodies and regulators declared that this could never be allowed to happen again.

At a macroeconomic level there are clearly factors that persist from that time. Combine that reality with an artificially low interest rate environment and we are back to a point at which consumer and corporate lending volumes and standards are starting to be questioned again.  Having said that, employment levels are high or recovering and there are few indicators that things are about to change for the worse.  Indeed, unemployment is at historically low levels in the core economies such as the UK (4.4 per cent) and Germany (3.8 per cent).

The Eurozone as a whole is averaging unemployment at 7.7 per cent which is back close to its pre-crisis low of 7 per cent and below its longer term average which is more like 9 per cent. Even countries such as Spain and Greece, which were particularly badly hit, with jobless rates peaking at over 25 per cent, are now over the worst.  So Europe presents a fairly healthy consumer and business climate at least in the short to medium term in most countries.

This indicates that the loans that are defaulting today are part of normal cycle of credit: flow business being generated by missed payments due to an individual’s life events, such as divorce, redundancy or illness or from a business over-trading or simply losing control of its cost base.  In the ordinary course of ‘flow’, financial institutions aggregate these individual defaulting loans into portfolios representing many thousands of individual accounts to be managed or sold.

What is interesting about these portfolios is that many of the circumstances that impact ability to pay are highly individual and often have little to do with the wider macro-economic climate.  Unemployment is the obvious exception and is naturally correlated with the ability of the general population to keep to their original schedule of repayments, a situation which would be compounded by any concurrent rise in interest rates.

However, for now, as unemployment continues to decline in Europe and the ECB base rate remains at zero, this flow generation of new defaults continues at normal levels.
The additional spike in non-performing loan portfolio sales across the continent over the last couple of years has been a product of a tougher banking regulatory environment coupled with a severe hangover from the last credit boom.

Supervisors and regulators have pushed banks to be more transparent and raise significant amounts of capital to address balance sheet concerns but, just as importantly, they have forced them to identify problem assets and clean up their balance sheets. This spotlight on capital sufficiency has meant that institutions which had not historically dealt with their NPL stocks on an ongoing basis have rapidly had to consider asset sale as a solution to release trapped capital.

By creating a universal definition of the term “NPL”, tightening the benchmarks and providing detailed guidance on the expected management of NPLs, a stock pile of historical bad loans have been unlocked.  Indeed, the total European NPL market size is estimated to be in excess of EUR1 trillion; with bad debt ratios double that of the US banking system.  Italy being a case in point: a country which until three years ago had sold relatively few NPLs, discovered it had over €300bn of them and consequently led the market in volumes of disposals in 2016 and looks set to do the same in 2017. 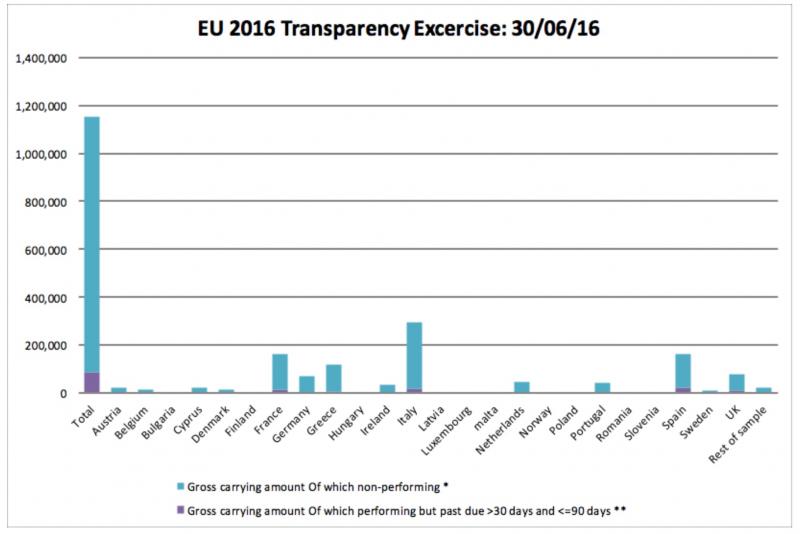 This has created much buy-side interest in these markets, although there is still a long way to go with the average NPL ratio at 5.5 per cent in the Eurozone and the worst jurisdictions reporting significantly higher levels such as Greece at closer to 50 per cent.  However, this is also very much a case of buyer beware – as with any aged and distressed asset, there can be a wide variety of potential outcomes. There might be billions of potential recoveries but, unfortunately, quantity rarely equates to quality.

Price discovery is essential to underwriting and the increasing level of NPL sales, particularly over the last three years, demonstrates that demand is responding to the additional supply. The laws of supply and demand over time should close in on equilibrium, with prices set to reflect quality and recoverability of receivables, ensuring that the market operates efficiently with differences in data quality, enforceability, and underlying credit characteristics factored into price relative to par.  Today, this is becoming a vibrant and functioning marketplace Europe-wide.

Improving the effectiveness of all financial institutions and introducing asset sales of stockpiled NPLs ultimately strengthens the whole European financial framework.  The centralised push from the EBA and ECB via the Single Supervisory Mechanism has already had a demonstrable impact.  Initiatives to incentivise banks to take action on their NPL stockpiles are critical to the future health of the banking system.

At LCM we talk of the sale of non-performing loans as an ordinary course of business activity for banks.  As one of the founders of the European market we have been buying loan portfolios for nearly twenty years.  During this time we have certainly seen that some markets are more developed or better prepared than others, with banks in countries such as the UK treating asset sales as an integral part of their credit and risk operations whilst elsewhere many others have failed to recognise the issue until it is too late.  So, today  we are witnessing a marked increase in asset sales where the continued sale of flow defaults  has combined with the stock sales of aged NPLs to create unprecedented amounts of non-performing loan portfolios coming to market: momentum that is set to continue.

Perhaps the real legacy of today’s NPL sales frenzy will be the mindset it creates within European banks for integrating the loan disposal process into their ongoing credit cycle in the future; where capital is released immediately from problem loans back onto balance sheet for redeployment in new lending to the economy rather than becoming a drag on efficiency for years to come.

Inevitably, as with anything new, there is a learning curve but now many more banks are in a position to benefit from selling NPLs to the open marketplace. Institutions which had not sold portfolios previously outside jettisoning participations in distressed corporate situations or commercial real estate are now realising the benefits of aggregating portfolios of more granular retail and business loans; what had been seen as an internal administrative and operational burden is now viewed as an asset and a source of capital.

This realisation should materially increase the level of flow business across all European countries for decades to come and, even when the original stockpile has gone, result in a far broader and deeper market.

This will mean that, rather than being forced into a retrospective clean up, financial institutions will be optimising the efficiency of their balance sheets in real time.  Whilst this looks advantageous to sellers and buyers alike, the greatest impact should be on the stability of the system and a reduction in the likelihood of, or at least the impact of, another banking crash.

The challenge of achieving this behavioural shift amongst all financial institutions in Europe should not be underestimated and understandably it has not been delivered overnight.
So who sparked the increase in NPL sales? We have a lot to thank supervisors and regulators for; in aiming to ensure future banking stability they have provided the spark to ignite the marketplace and created a regime that puts a policy of getting clear of defaulted or non-core loans front and centre of managing any financial institution’s balance sheet.  We firmly believe that not only is the fire now alight, but that market participants on all sides have an active interest in ensuring that it continues to burn brightly.

So, is the market perfect? Not at all, but it is far more effective than it was ten years ago and looks set to continue developing at a pace for the next decade to come.